A few weeks ago, I was really struggling with the way chores at the farm were being handled. It seemed like we were spending more time taking stuff from one field to the next than we were actually doing the chores at hand. So guess what we did?

We had ourselves a good ol’ Kaizen event.

When we first set up the farm, to be honest, a lot of it was guessing what we would be needing and where. Water? Hay storage? Grain storage? Everything was outside and sort of close to the final locations – but as time went on, we learned that some of our choices weren’t the most ideal. Now with several months under our belt, and a better understanding of what is needed and where, we completely changed our routines and created a flow

For many reasons, I’m a prolific poo scooper, but we don’t cross cleaning tools with the breeds. This means the dogs have their own rake and bin, as do the alpacas and the sheep. The first Kaizen purchase was additional rakes and bins so that each lot for the sheep had their own Poo Containment System (PCS). Instead of carrying the rake and bin from Field 0A to Field 1 (this means crossing through Field 0 which is the alpaca lot), then down to Francis, then back – we now have 1 set for 0A and another set for Field 1. There are now 2 sets in the alpaca lot so that we can scoop together, and finish faster. (Scooping the alpaca lot is usually the last chore we complete.) 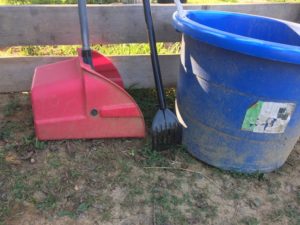 This is a not to scale rough schematic of the farm: 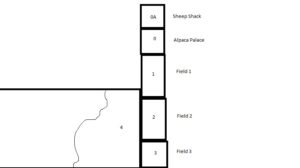 The corn was stored next to the field where the two mamas are currently living (Field 0A). The issue with that location was that from the time they were weaned until they are bred later this year, they aren’t being fed corn! The babies are being fed (a lot…) and Francis (a little bit – just to keep him sweet). So, we moved the corn from outside Field 0A, to inside Field 1. The babies currently live at the top of Field 1, while Francis lives at the bottom.

Speaking of corn and feeding the babies… when they were smaller and shyer, it wasn’t an issue to use a small trough that just hooked to the gate. But as they grew, they started knocking each other out of the way to eat more. It got to the point that I would have to hold the feed trough so they didn’t knock it off and spill the corn all over the ground. 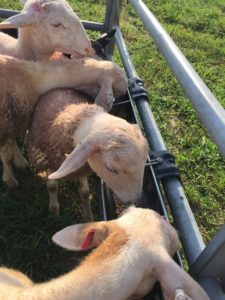 That was such a time stealer for me – so we bought a “real” grain trough. Toss the corn & protein pellets in, everyone has room, and no more sitting and holding while they eat. 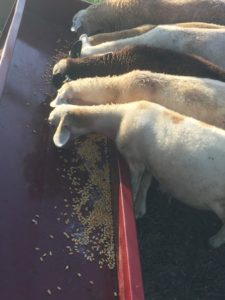 Another easy move was that the dog food was originally right next to the corn – so we moved it right next to where the dogs are fed in Field 0.

It sounds so simple, doesn’t it? Those few changes have improved our efficiency –and chores literally take ½ the time they did before since we’re no longer backtracking our steps!