Each morning after the alpacas, sheep, and dogs are watered, fed, and scooped – the chickens get let out to start their day of work. About a week or so after I put that newspaper blanket down, I absentmindedly realized that big mess of gnats and flies were no longer swarming around the BSF bin. I got so excited, and picked up a corner to take a peek. TA-DA!!!!!!

Though very small in number, I had some BSF larvae in the bin!!!!!

One of the really amazing side effects of BSF is that they emit pheromones, which are a natural fly repellant. The life cycle of larvae to maturation of fruit flies and houseflies is shorter than that of the BSF, though – so that is why there were so many of these pest flies before the BSF showed up.

I was so excited my newspaper blanket worked. Now, I only had to keep adding food for them and they would multiply. I continued learning about the BSF and how to support and encourage them to keep making a home at S&B. Having corrugated cardboard in and around the bin gives the mamas a safe place to lay their eggs – so I used the spoiled cardboard that came from a shipment of bad tomatoes, and nestled it near the back. Each time I would add new BSF food, I would lift up the corner of the newspaper blanket and then carefully be sure that the bin was completely covered again.

Another really interesting piece of the BSF addition here is that they eat all the food – but what is left isn’t compost in its finished state. However, what is left is absolutely perfect food for my friends Eisenia fetida. Remember them? Yep. My red wiggler worms. I harvested a dozen or so from their bin, and added them to the BSF bin to see what they would do. They are multiplying like crazy, and happily munching on the BSF leftovers.

I do love the gross and squishy around the farm. And though this looks really (really) gross, please bear in mind that it used to be a watermelon. 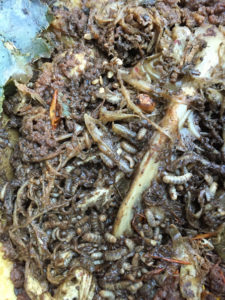 Right now, I pull out a handful of the dark gray larvae (these are the mature ones) to feed to the chickens as a treat. They go crazy over them!

I know I keep referring to these guys as “perfect,” and I wonder why more research isn’t being done to utilize them to reduce the food waste issues that we have in America. Think of the food waste from your local grocery store. Or your favorite restaurant. Or even your own kitchen. So much of that is just dumped straight into the trash and it gets taken to a landfill where it attracts mice and rats and bugs, it creates methane gas and smell, and takes up space. Imagine if your favorite restaurant had a BSF bin they used as a disposer, instead. BSF will eat just about anything, and they do so quickly and efficiently. When they pupate, the adults exist only to reproduce… they don’t even have mouths to eat, and aren’t interested in bothering humans or animals.

For us at S&B, this has been a worthwhile experiment this year. I found the BSF rhythm, and I already have plans for next year to construct a standalone bin with runoff tubes to immediately capture the mature larvae. For now, I am excited and thrilled that they are taking care of the excess organic waste the chickens don’t eat, and becoming a wonderful (and free!) food resource for the chickens. And anytime you can reduce the cost of feed, it’s a very good thing!